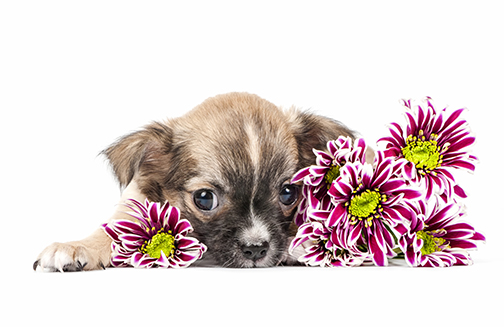 25 Interesting Facts About the Chihuahua Breed

1.  Chihuahua ancestors date back to the 9th century A.D.

Chihuahuas have a remarkably interesting history. Their lineage goes back to the ancient kingdoms of pre-Columbian times. Their ancestor, the Techichi originated in an area that we now know as Mexico. They were thought to be a part of the Toltec and Aztec culture. Additionally, they have lineage dating back to 100 A.D. through artifacts discovered of small dogs with large eyes resembling Chihuahuas. Depending on who you talk to, the story of Chihuahua ancestors varies from Mexico to Europe and even Asia. Carvings were discovered from the Toltec culture in Mexico that closely resemble the Chihuahua’s round head and erect ears, so it is likely that they descended from Mexico.  It is thought that Chihuahuas made their way to the United States when they were sold to tourists crossing the border. Throughout history Chihuahuas have played the role of hot water bottle, religious sacrifice, desert dweller, canine curio, cash crop and finally lap guard. Chihuahua’s ancestors were originally bred for companionship, religious ceremonies, rituals, and food. 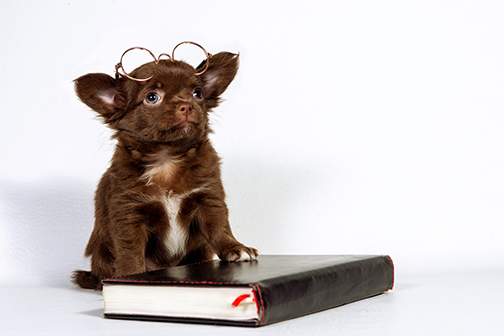 2.     They have the largest brain to body Ratio
They are known to for the breed to have the largest brain. Chihuahuas are smart, bold dogs that like to get their own way. They will continue to learn and surprise you throughout their lives, even as seniors. Chihuahuas generally have between one and three puppies, and they have the highest rate of Cesarean sections amongst all purebred dogs. The larger size of the Chi’s head in relation to mom’s narrow width often requires the surgery.

3.     Charming Personality
Chihuahua’s temperament includes being lively, alert, bold, courageous, intelligent, incredibly loyal, and devoted. Just because they are tiny, that does not stop them from interacting with large dogs and pushing the envelope.  Chihuahuas are truly Napoleon in a dog suit. By eight weeks of age, Chihuahua puppies are curious and investigative. 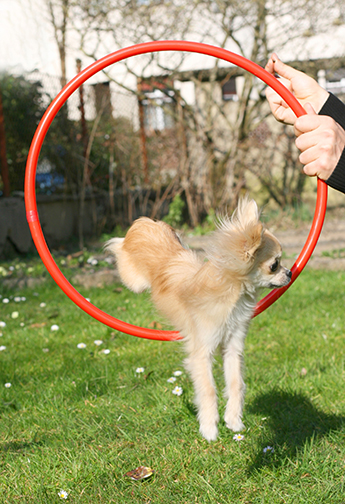 4.     Can be extraordinarily successful in dog sports
Despite their tiny size, Chihuahuas, can do great in dog sports.  Agility, for example, is an exhilarating way to exercise with your dog, it is a fast-paced obstacle course with tunnels, hurdles, and other challenges that your dog completes as quickly as possible. Chihuahuas are quick learners, especially if training involves treats. 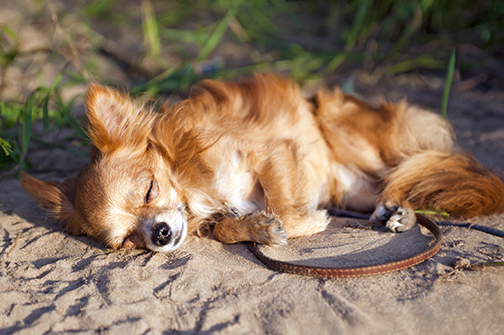 5.     Chihuahuas love to sunbathe
Chihuahuas, just like most other dogs, love warmth whether it’s outside in the sun or finding a sunspot in the home. Make sure they only stay in the direct sun in short spurts to avoid getting sunburned. They also love warm blankets just out of the dryer.

6.     Chihuahuas are fiercely loyal for life
This intelligent, big personality pup makes a loyal companion. The AKC reports that “thanks to their enthusiasm, they usually don’t need extensive training.” 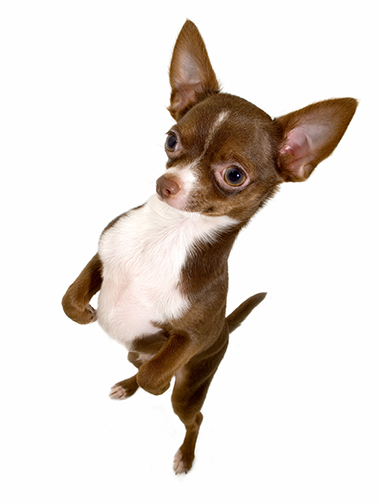 7.     Chihuahuas can be real show-offs
Despite being small, they are an active breed and love to show off newly learned tricks and even ones they came up with on their own. They are very enthusiastic and loved to play.

8.     Chihuahua Popularity
Chihuahuas rank in popularity in the top three in 34 states in the US. Globally, number eight in breed popularity. Their American Kennel Club (AKC) rank is 33. The breed is a favorite among celebrities. Bandleader Xavier Cugat popularized Chihuahuas in the 1940s and 1950s. Stars such as Demi Moore, Madonna, Mickey Rourke, Jamie Lee Curtis, and George Lopez have all owned a Chihuahua. They are famous onscreen, too, with starring roles in movies like “Sex and the City,” “Beverly Hills Chihuahua,” and “Legally Blonde.” 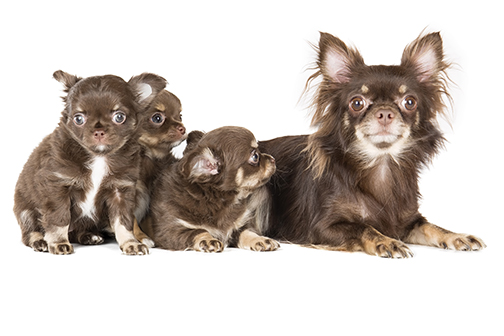 9.     Chihuahua puppies are born with floppy ears
They begin to stand erect, with fully erect ears occurring around six months of age. 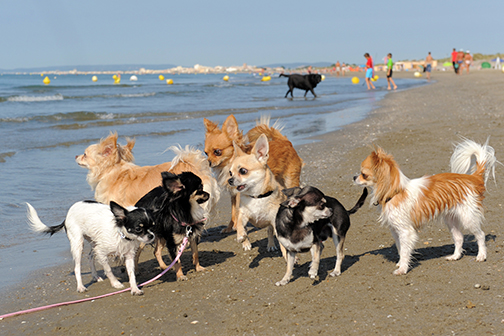 10.     Chihuahuas are Clannish
Chihuahuas can appear snobbish, as they generally do not like other dogs, but they love to hang out with other Chihuahuas.

11.     Chihuahuas enjoy a long-life span
Chihuahuas live on average 14-16 years and some may live up to 20 years. They are generally extremely healthy dogs. 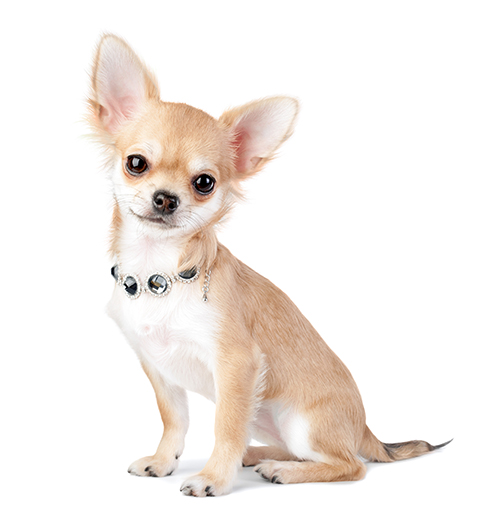 12.     The Chihuahua breed standard
“A graceful, alert, swift moving little dog with saucy expression, and with terrier-like qualities of temperament. Compact and confident, Chihuahuas are ideal city pets. They are too small for roughhousing with kids, and special care must be taken in cold weather, but Chihuahuas are adaptable—as long as they get lots of quality time in their preferred lap.” 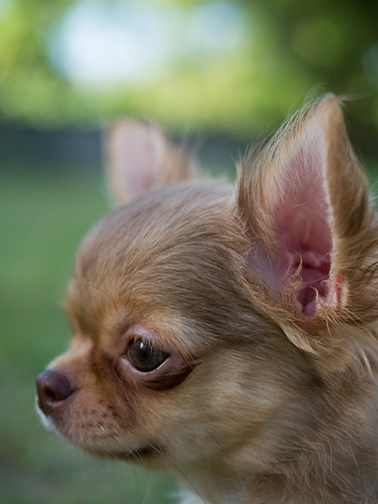 13.     Be Careful with their heads
Chihuahuas have a soft spot on their head called a molera. A Chihuahua might have the soft spot for their whole life, or it may close. It all depends on a Chi’s size, genetics, and skeletal structure. 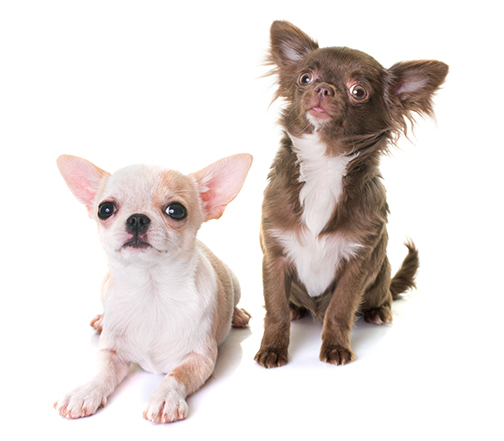 15.    Apple Head or Deer Head
In a nutshell, apple head is the official Chihuahua standard. Deer Head Chihuahuas are not recognized, as they do not meet the Chihuahua breed standards. In general, Deer Head Chihuahuas have longer legs, wide set eyes, and have a flat top head shaped like a deer’s as well as longer snouts and ears.

16.     Name Origination
Chihuahuas are named after the largest state in Mexico, Chihuahua, as that is where they were discovered. It is thought that Christopher Columbus brought them to Europe, as he mentioned a small dog in a letter to the King of Spain. 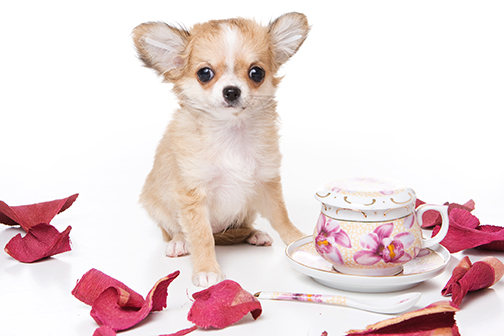 17.     There is no such thing as a Teacup Chihuahua
Although Chihuahuas have decreased in size over time, there is no such separate class as a Teacup Chihuahua. For some reason, many people, are drawn to tiny Chihuahuas. These smaller Chihuahuas are just that, the smaller version of the breed which happens across all breeds. Teacup is a marketing term and not an official canine classification. Chihuahuas are already an exceedingly small breed and smaller Chihuahuas have additional health concerns like hypoglycemia, larger moleras, hydrocephalus, tooth loss and other injuries. They also may not thrive as well as larger Chihuahuas and are not a good choice for an inexperienced dog owner or as a gift for a child.

18.     Has the Largest variety of coat colors
Chihuahuas come in essentially every coat color and a variety of markings.  Their markings add more variety to each coat color as well as coat color just based on markings such as brindle and merle. The American Kennel Club lists more than 40 different colors and markings for the Chihuahua. 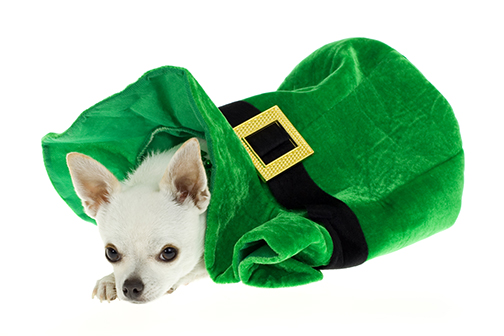 19.     Love to cuddle and burrow
Chihuahuas love to cuddle with their special person. If they are sitting on the couch with you, at some point you will find them burrowed under the pillows or couch blanket.

20.     Chihuahua’s ancestors were sacred in Toltec and Aztec Cultures
The Mayan and Toltec cultures believed Chihuahuas were sacred. They thought Chihuahuas guided their owner’s soul to safety in the afterlife. When an owner died, he was burned, and sadly so was the dog. They also believed diseases could be transferred from humans to dogs, curing the human in the process.

21.     One of the oldest breeds, made official in 1904
Chihuahuas date back to the ninth century and possibly earlier. The American Kennel Club made them an official breed in 1904. The Chihuahua Club of America, the official parent club of the Chihuahua Breed was established in 1923.

22.     The American Kennel Club’s first registered Chihuahua
The first Chihuahua to be registered with the AKC was named Midget. She was owned by H. Raynor of El Paso, Texas. 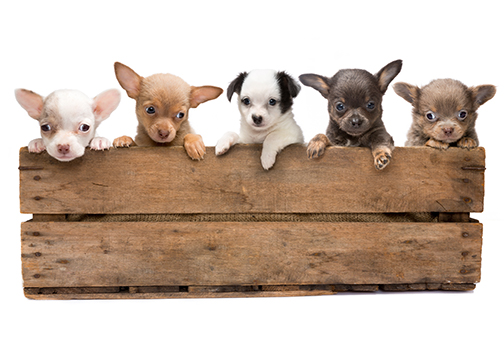 23.    Chihuahuas are the world’s smallest dog breed
Although Chihuahuas are the world’s smallest breed now, they did not used to be that way. Today they are on average four to eight pounds and six to nine inched tall. Their ancestor, the Techichi was likely the earliest Chihuahua-like dog. Based on carvings, this dog was plump, with a round head and erect ears that clearly resembled a Chihuahua. 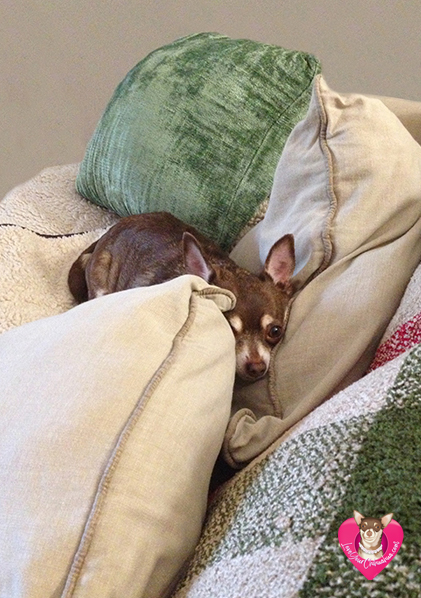 24.     They are tiny, sassy, and adorable
Chihuahuas are bold, brave and are on a mission to get what they want. They are also incredibly sweet and loving. I assure you; this is a companionship you have never experienced before.

25.     They are the spice of life!
Chihuahuas are a wonderful breed and will bring a lot of depth to your life. Expect great companionship and lots of cuddling, laughs and love. 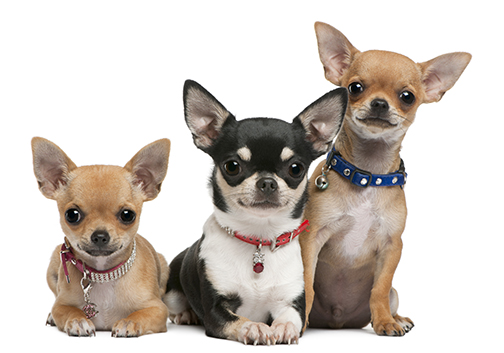 How do you know if a Chihuahua is right for you?

Take this quick Quiz to find out if a Chihuahua is the perfect breed for you.

Quick Links for the main topics you will find on this site. 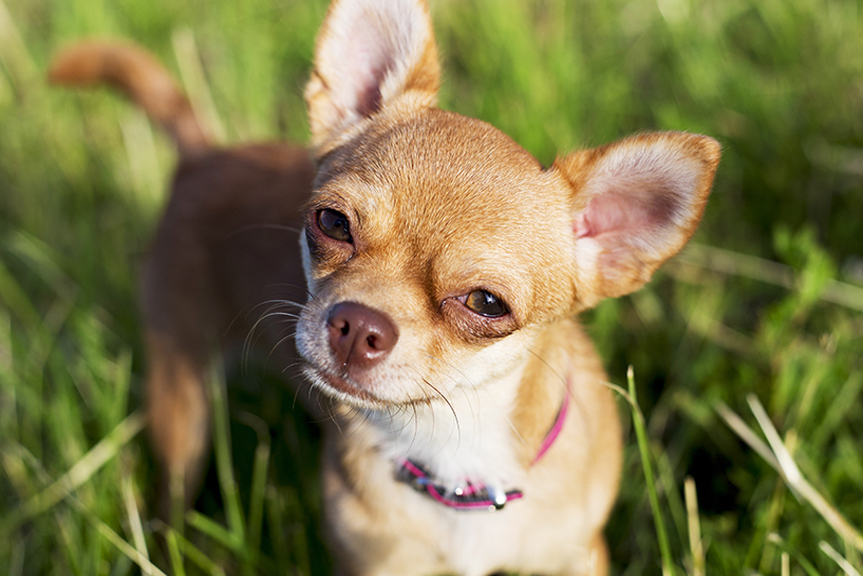 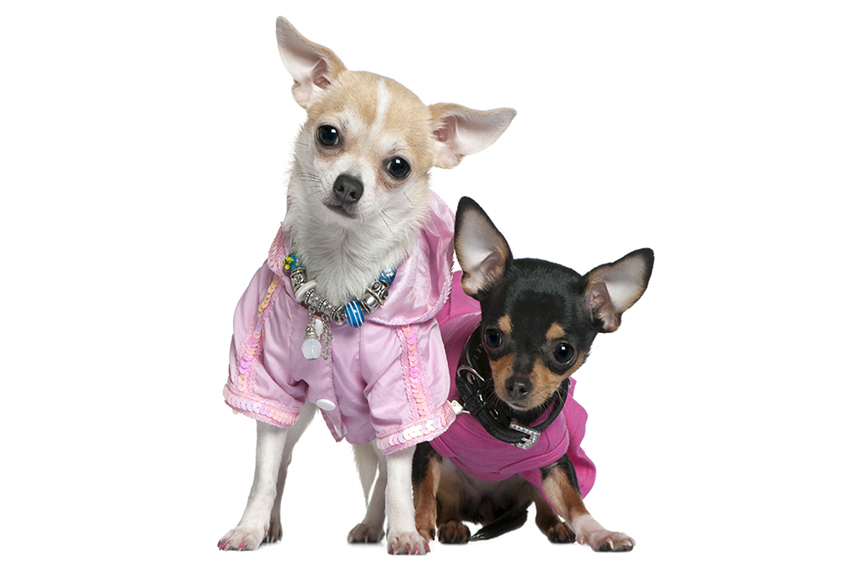 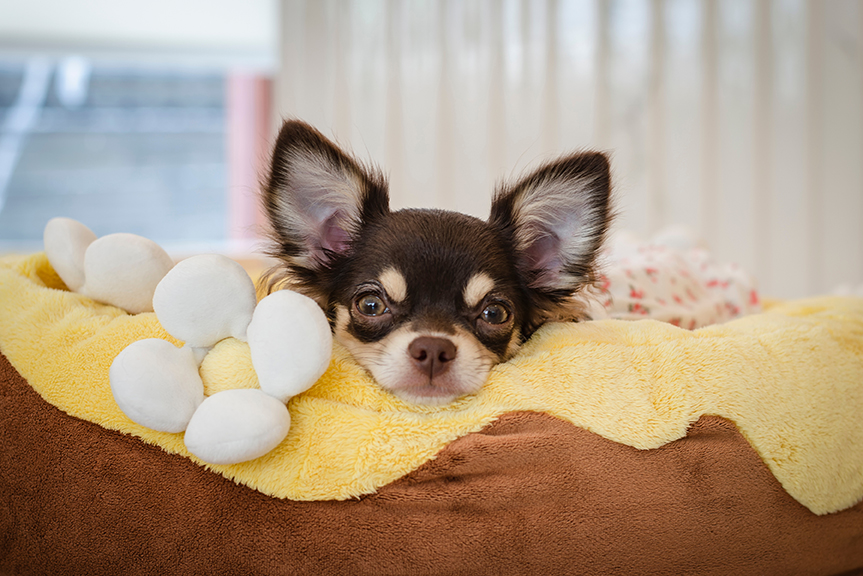 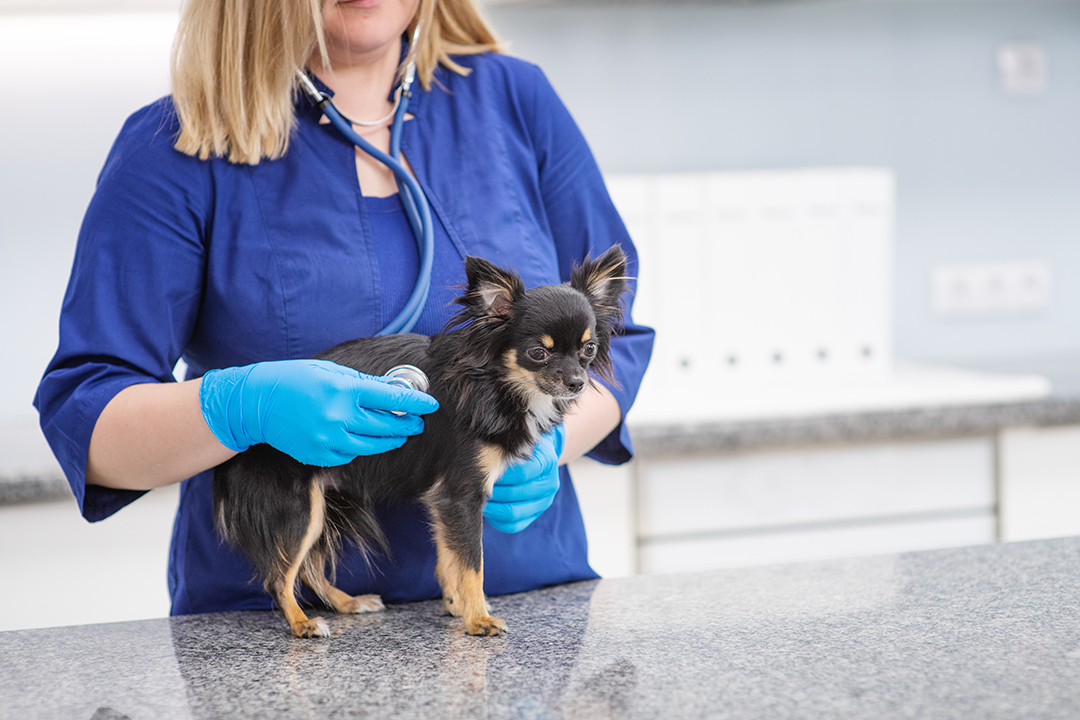 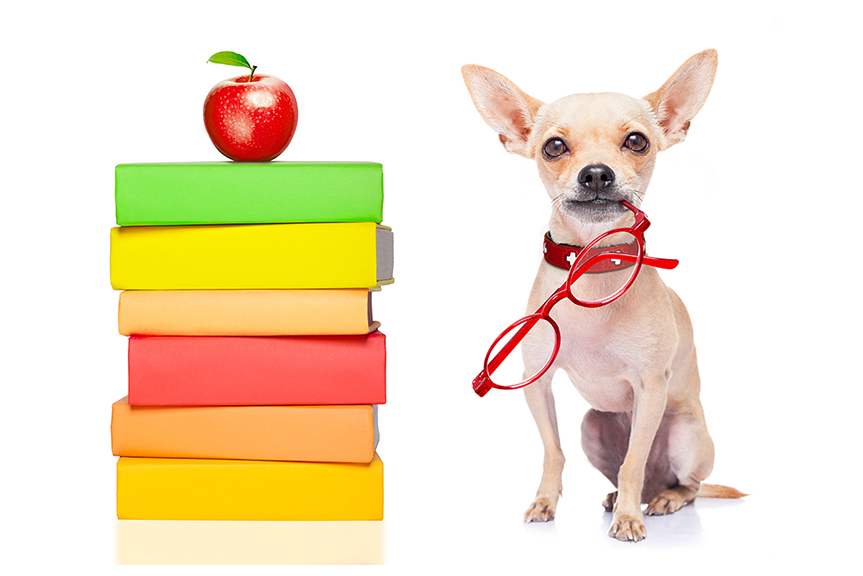 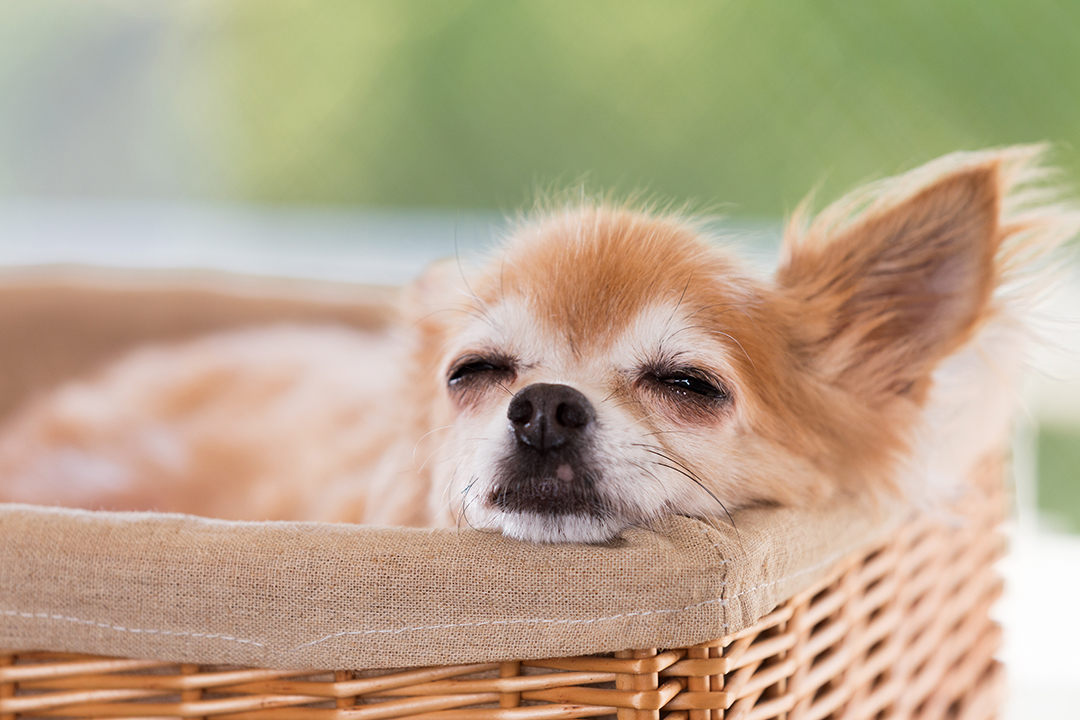 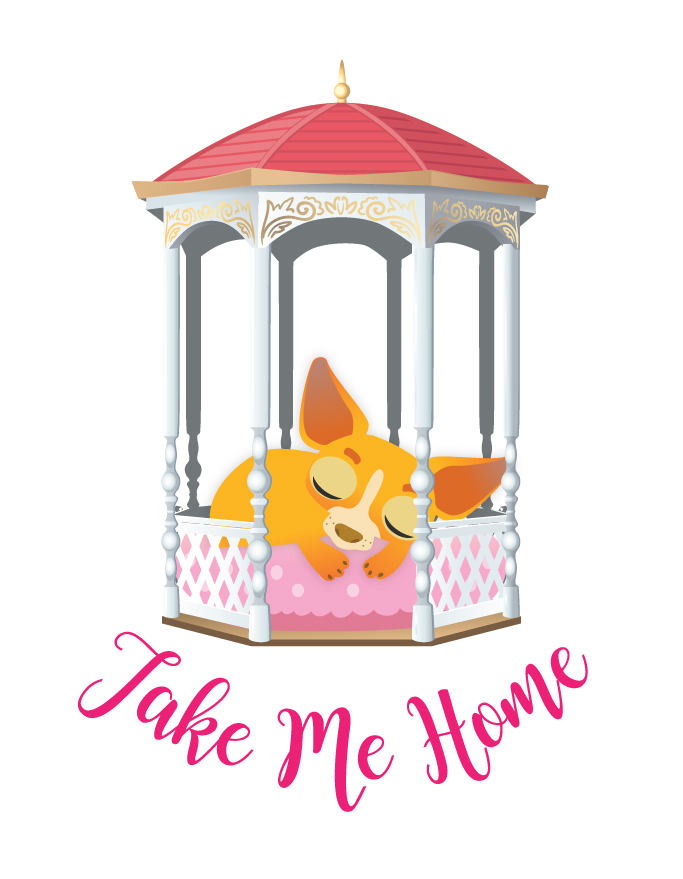 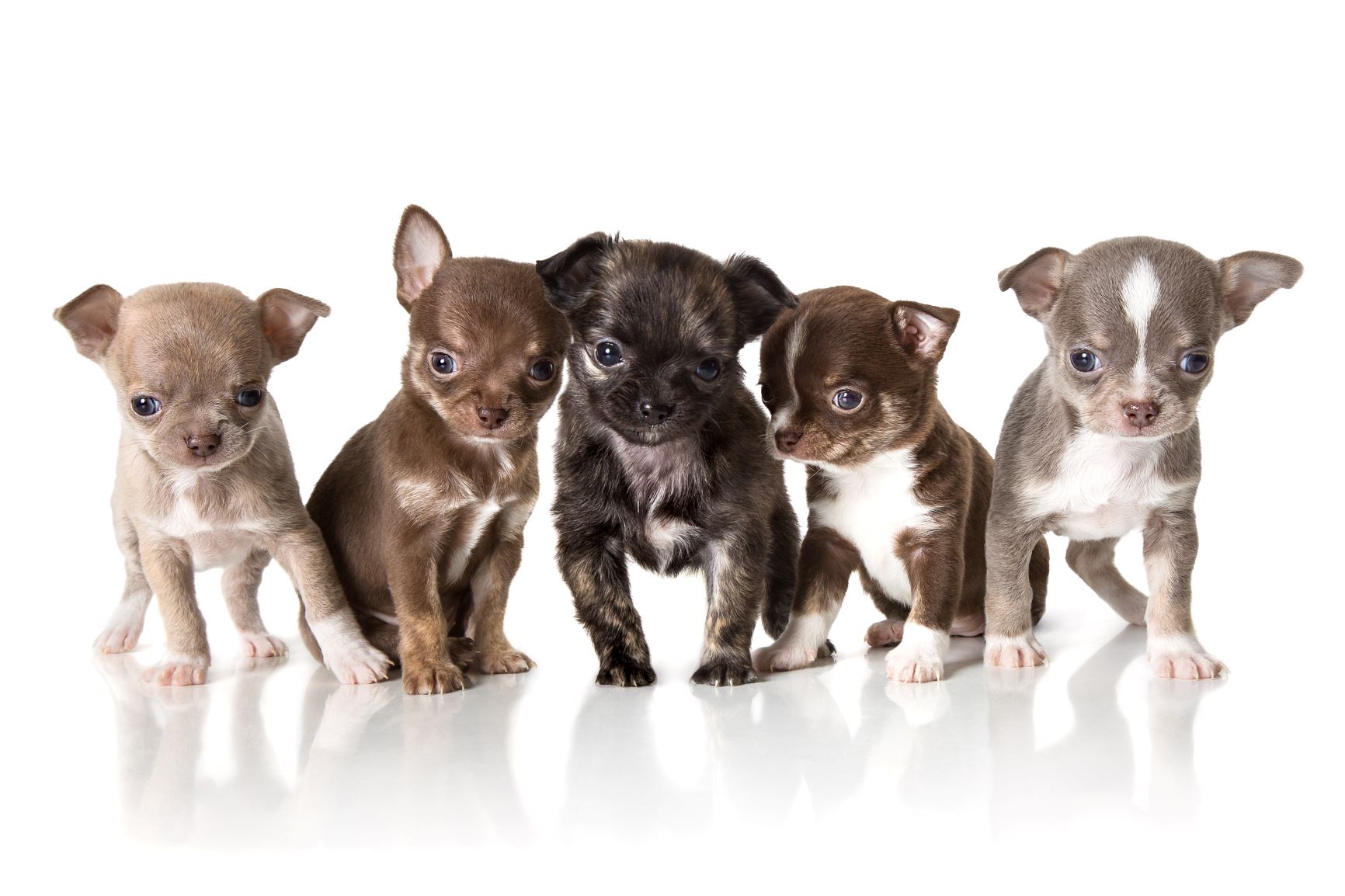 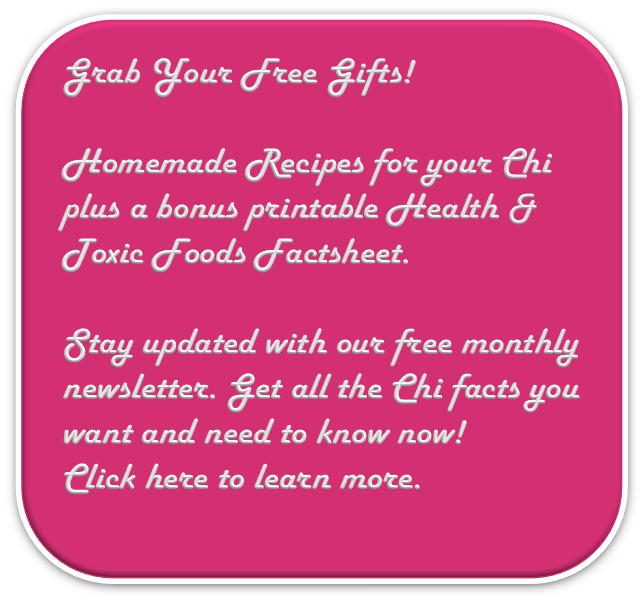 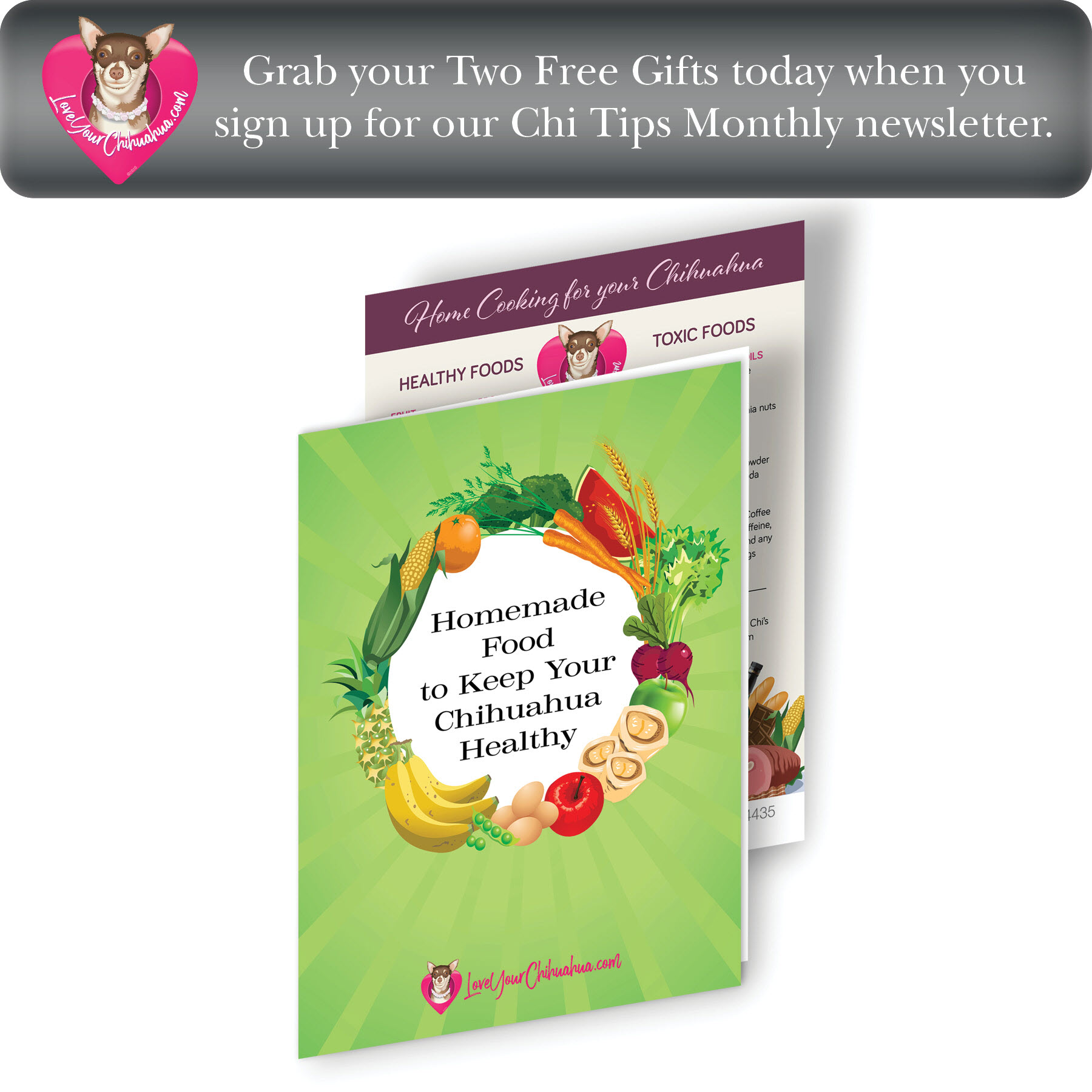 Chihuahua of the Month 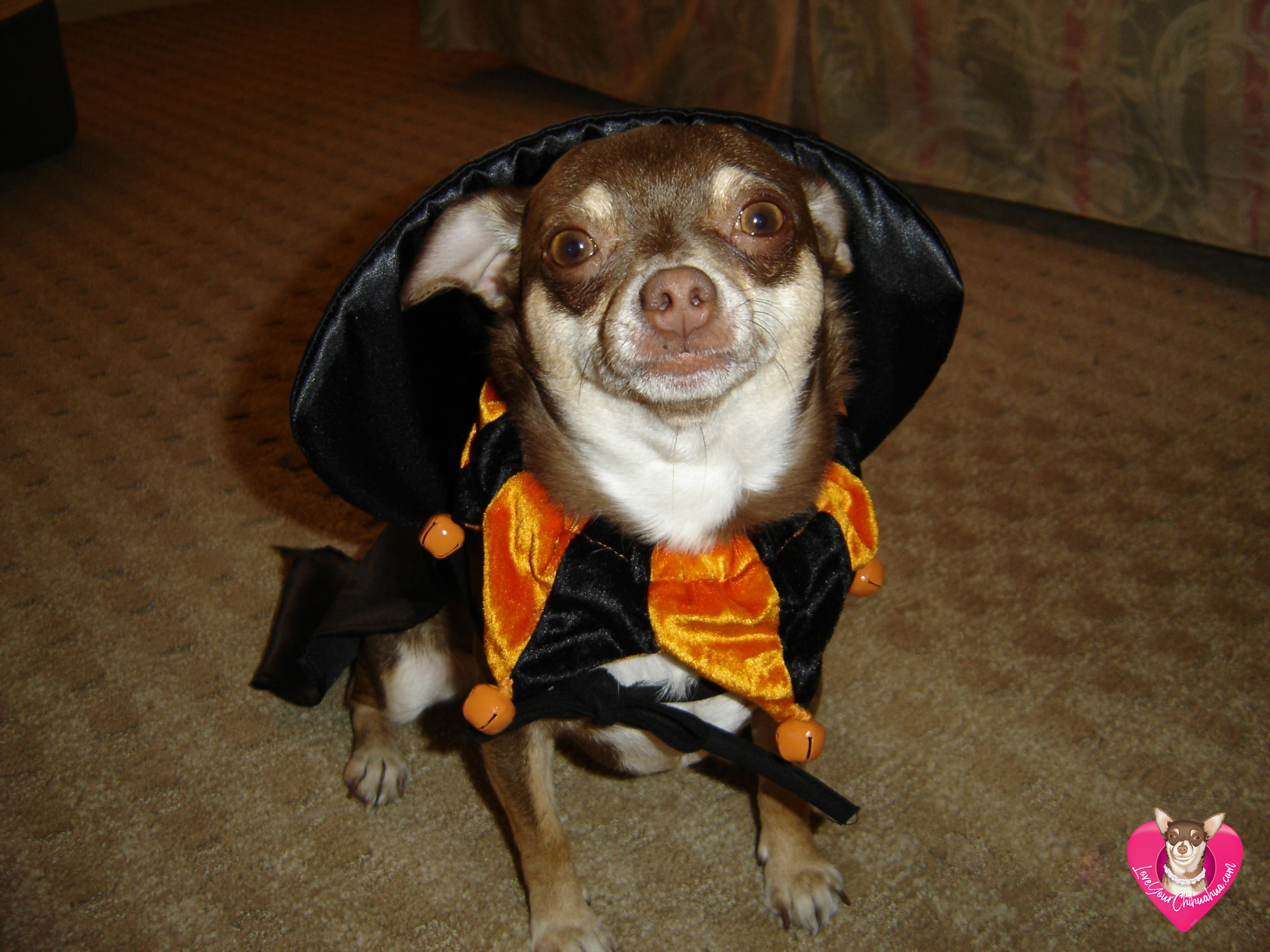 LoveYourChihuahua.com is for informational purposes only and not a substitute for professional veterinary advice, diagnosis, treatment  or medical care.